Home About us History of the Diocese of St Davids

History of the Diocese of St Davids

The history of St Davids Diocese is long and varied. Celtic saints and Welsh princes, mediaeval bishops and Victorian legislators, Reformation scholars and Puritan divines, ascetic monks and Georgian parsons – all have left their mark on its diverse spiritual landscape.

The names of our 300+ churches and many holy wells preserve the memory of Dewi and his contemporaries like Teilo, Meugan, Brynach, Illtud and Padarn, who carried the torch of Christianity through the Roman Empire and into the Dark Ages.

Neither the Vikings nor the Normans could extinguish their faith nor terminally damage the mother churches and hermitages. The tradition of scholarship and asceticism, the skills of carving stones and illuminating manuscripts, lived on.

Nevertheless, it was the Normans who largely gave the diocese the shape it retained until 1923 when, following disestablishment, the Diocese of Swansea and Brecon was carved out of its Eastern edge.

It is still the largest diocese in Wales, but it once stretched into Gwent and Powys and over the English border into Herefordshire.

The Normans also created the parochial system through which the diocese has operated at grass roots level ever since.

It was during the period between the 12th and 16th centuries that many of our parish churches were built, extended and beautified, usually on more ancient sites. The mediaeval church served the whole community through its liturgical celebration of the rhythms of life through the sacraments.

Pilgrimage also played a major part in church life both locally and at internationally recognised sites such as St Davids Cathedral. It continues to do so today.

The Reformation of the 16th century left the religious landscape largely in place, with the exception of the religious houses, but with its adaptation of the mediaeval liturgies to highlight the newly recovered primacy of the Word of God, the interiors of church buildings became much starker. 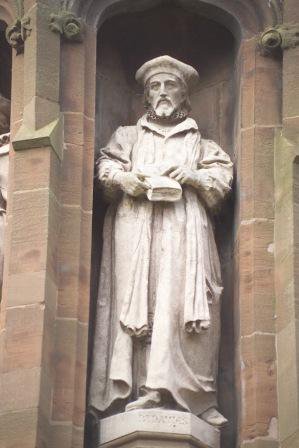 Bishop Richard Davies, Precentor Thomas Huet and Bishop William Morgan, key figures in the translation of the Holy Scriptures into Welsh, were all associated with the diocese at this time.

Later phases of the Reformation led Puritan soldiers to vandalise the cathedral leaving it in semi ruin for centuries. The lands and property of the church in the diocese were sequestered during the Commonwealth.

The Restoration of Charles II led both to recovery on the part of the Anglican Church and the emergence of the Dissent on the part of dissatisfied Puritans.

But the financial consequences of the Reformation led to pluralism, endemic poverty among the clergy, ruined and badly maintained buildings, all of which contributed to the rise of Dissent and Methodism in the Georgian church.

The 18th and 19th centuries saw the Evangelical and Tractarian Revivals which, allied to the vision of bishops like Samuel Horsley, Thomas Burgess, Connop Thirlwall and Basil Jones, and the ecclesiastical legislation of the period, saw new energies released. These led to significant church restoration and rebuilding both in rural areas and among the expanding populations of newly industrialised communities.

The most recent phase of the diocese’s history begins with the watershed of Disestablishment in 1920. Bishop John Owen, the then Bishop of St Davids,, who had opposed disestablishment, fought hard to secure the best deal for the new Church in Wales in its aftermath.

In the 20th century, the diocese weathered the storms of mass unemployment, agricultural depression and world war only to experience a decline in numbers from the 1960s onwards.

This led to the redundancy or closure of church buildings which should never have been built or restored in the Victorian period, a process that continues. But a parallel programme of innovative re-ordering is helping to put our surviving churches back into the communities they serve.

Today in the twenty first century, the diocese is looking forward and outward, through Growing Hope, a strategy for growth that seeks to refresh its mission and ministry by the establishment of Local Ministry Areas. And a fourth archdeaconry has been created to foster the growth of new Christian communities.